Scientific Reasons Why Your Back Hurts

Posted on May 25, 2018 | Comments Off on Scientific Reasons Why Your Back Hurts 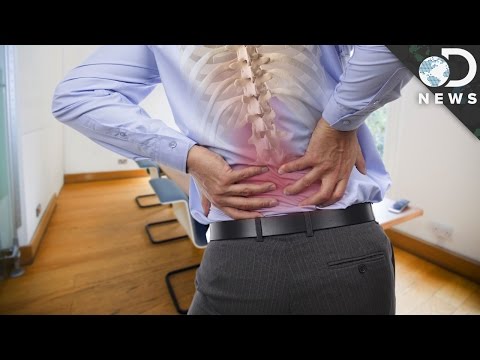 I don’t think ancient humans were complaining about pains from how they “slept funny,” so if we’re the same species, what’s wrong with us? Aches and pains are just part of life, but do you think our cave, tree or grassland dwelling ancestors gave a crap about little aches? Maybe they just didn’t get them as much. A story making the rounds this week claims to have an answer — our posture is bad; like, really bad. A California acupuncturist with chronic back pain travelled the world exploring cultures where chronic back pain wasn’t common and attempted to reverse engineer their lifestyle choices. She observed cultures where women and men spent their days working in fields, carrying heavy objects on their heads, or quote “hunched over weaving, for hours,” and noted that none of them had back pain, even though many were very old.

Her explanation? Posture. Based on her observations, the spine shouldn’t form an S, but a J. Looking at these people, late 19th century medical texts, and statues from ancient cultures, all told her we were messing with our spines! This is a totally plausible reason for pain, evolution guided us to the proper posture — and our social culture has altered it — but this wasn’t a scientific study, just a number of case studies. That being said, there are a number of studies saying we Americans (and many others) probably ARE doing things wrong. There’s a TON of talk around the office about how we sit in hairs, and my mom used to yell at me about slouching.

If the acupuncturist I mentioned is right, then sitting up straight COULD help, but if non-science isn’t enough, studies from San Francisco State University have found keeping up straight when seated correlates with generating more positive memories, whereas walking slumped decreases your energy levels. So listen to my mother, and fix your posture! You’d think something you do once a day (or maybe more!) you’d be good at, but you might want to sit down for this one: you’re pooping wrong.

Evolution didn’t involve toilets, or pressure points in the back. Not even once. Instead, humans would, like other animals, squat! Our human anatomy isn’t made to push out a half-pound (120g) of waste while sitting down, instead, we’re supposed to be squatting with the thighs running parallel to the abdomen! A 2003 study in Digestive Diseases and Sciences found people who squatted pooped faster, and with less effort than those on a toilet! A separate study from 2010 x-rayed people while they pooped out a fluid that had been put INTO their colons and they found abdominal strain was way lower for squatting than sitting! I love science.

You don’t have to rip the porcelain throne out of the bathroom though, just get a shorter one, or even put a stool underfoot to help align your legs and abs! Since the late 1500s when the flush toilet swirled into our midst, we’ve been pooping wrong — and now we’re having problems with our our bowels. Pooping wrong creates all sorts of problems with constipation and, more seriously, the abdominal strain causes painful swelling and bleeding of the veins around your anus — that is hemorrhoids! In the US, eighty percent of the population will have a sleep-related back problem at some point in our lives, and yet… we treat the symptom not the disease. We spend one third of our lives asleep, but we’re terrible at that too.

Sleeping on our stomachs is bad for the spine, the fetal position hunches the back and leads to neck AND back pain. Sleeping on medium-firm to firm mattresses FAR better for the alignment of the back than too soft or too hard. And if you don’t want to swap mattresses, at least switch to sleeping on your back; it’s supposed to be the best for a natural spine position. Again, think about our evolution, we didn’t evolve to sleep on a pillowtop, but on a thinly cushioned patch of grass or dirt. Today, about one-third of Americans in their 50s have some kind of chronic pain in their neck or back; another quarter have pain in their knees or legs, and another 18 percent reported more general pain. According to a Gallup poll, chronic pain increases from age 25 to 60 before it levels out.

There are a number of correlations to obesity, lower income, but overall — enjoy your early 20s, because after that you start FALLING APART. Regardless, with a few simple tweaks, we can all sleep, walk, sit and poop better. Thanks science..

Comments Off on Scientific Reasons Why Your Back Hurts